The Truth About Mortgage Rates

The Truth About Mortgage Rates

One of the most important aspects to successfully obtaining a mortgage is securing a low interest rate. After all, the lower the rate, the lower the payment each month and the faster you can build equity in your home.

Unfortunately, many homeowners tend to just go along with whatever their bank or mortgage broker offers, often without researching mortgage lender rates or inquiring about how it all works. Whether you’re interested in rates or not, it’s probably a good idea to get a better understanding of how mortgage rates move and why.

To put it in perspective, a change in rate of a mere .125% (eighth percent) or .25% (quarter percent) could mean thousands of dollars in savings or costs annually.  And even more over the entire term of the loan.  See my mortgage payment charts for more on that.

Mortgage rates are offered in eighths.

When you see rates advertised that have a funky percentage, something like 4.86%, that’s the APR, which factors in the costs of obtaining the loan. Same goes for quintessential promo rates like 4.99% or 5.99%, which again factor in costs and are presented that way to entice you.  At Firefighter Mortgages, there are $0.00 lender fees, which narrows the difference between the actual rate and the APR.

Those popular surveys also use average rates, which don’t tend to fall on the nearest eighth of a percentage point.  Again, these are averages, and not what you’d actually receive.

Your actual mortgage rate will be a whole number, like 5% or 6%, or fractional, with some number of eighths involved.  That’s just how mortgage interest rates operate.

However, some lenders may offer a promotional rate such as 4.99% instead of 5% because it sounds a lot better…doesn’t it?

So, how are mortgage rates set?

Although there are a slew of different factors that affect interest rates, the movement of the 10-year Treasury bond yield is said to be the best indicator to determine whether mortgage rates will rise or fall.  But why?

Though most mortgages are packaged as 30-year products, the average mortgage is paid off or refinanced within 10 years, so the 10-year bond is a great bellwether to measure interest rate change. Treasuries are also backed by the “full faith and credit” of the United States, making them the benchmark for many other bonds as well.

Additionally, 10-year Treasury bonds, also known as Intermediate Term Bonds, and long-term fixed mortgages, which are packaged into mortgage-backed securities (MBS), compete for the same investors because they are fairly similar financial instruments.

However, treasuries are 100% guaranteed to be paid back, while mortgage-backed securities are not, for reasons such as payment default and early repayment, and thus carry more risk and must be priced higher to compensate.

How will I know if mortgage rates are going up or down? 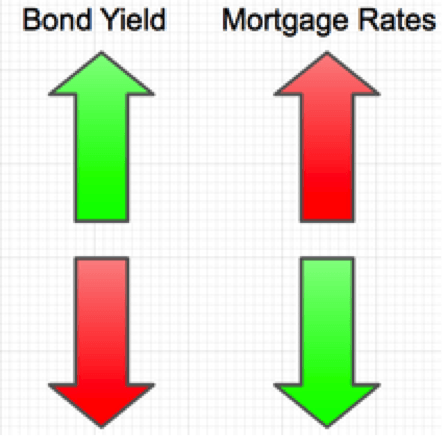 Image from The Truth About Mortgage

Typically, when bond rates (also known as the bond yield) go up, interest rates go up as well. And vice versa. Don’t confuse this with bond prices, which have an inverse relationship with interest rates.

Investors turn to bonds as a safe investment when the economic outlook is poor. When purchases of bonds increase, the associated yield falls, and so do mortgage rates. But when the economy is expected to do well, investors jump into stocks, forcing bond prices lower and pushing the yield (and mortgage rates) higher.

So a good way to predict which way mortgage rates are headed is to look at the 10-year bond yield. You can find it on finance websites alongside other stock tickers, or in the newspaper.  If it’s moving higher, mortgage rates probably are too.  If it’s dropping, mortgage rates may be improving as well.

To get an idea of where 30-year fixed mortgage rates will be, use a spread of about 170 basis points, or 1.70% above the current 10-year bond yield. This spread accounts for the increased risk associated with a mortgage vs. a bond. So a 10-yr bond yield of 4.00% plus the 170 basis points would put mortgage rates around 5.70%. Of course, this spread can and will vary over time, and is really just a quick way to ballpark mortgage interest rates.

Mortgage rates are very susceptible to economic activity, just like treasuries and other bonds.

As a rule of thumb, bad economic news brings with it lower mortgage rates, and good economic news forces rates higher. Remember, if things aren’t looking too hot, investors will sell stocks and turn to bonds, and that means lower yields and interest rates.

If the stock market is rising, mortgage rates probably will be too, seeing that both climb on positive economic news.

What other factors move mortgage rates?

Issues such as supply come to mind. If loan originations skyrocket in a given period of time, the supply of mortgage-backed securities (MBS) may rise beyond the associated demand, and prices will need to drop to become attractive to buyers. This means the yield will rise, thus pushing mortgage rates higher.

But if there is a buyer, such as the Fed, who is scooping up all the mortgage-backed securities like crazy, the price will go up, and the yield will drop, thus pushing rates lower. If lenders can sell their mortgages for more money, they can offer a lower interest rate. This explains why the Fed has purchased all those MBS. They can essentially guide mortgage rates lower, and ideally keep home prices stable, by enticing more would-be buyers into the market.

Timing is an issue too. Though bond prices may plummet in the morning, and then rise by the afternoon, mortgage rates may remain unchanged. Sometimes the bond movement doesn’t make it down to the capital markets, or it simply takes more time to do so, thus rates are unaffected. Lenders are typically cautious about lowering rates, but quick to raise them. Put another way, good news can take a while to move rates, whereas bad news can have an immediate impact. Go figure.

Tip: Mortgage rates can rise very quickly, but are often lowered in a slow, calculated manner to protect lenders from rapid market shifts.

The situation is a lot more complicated, so consider this is an introductory lesson on a very complex subject. And remember, the par mortgage rates you see advertised don’t take into account any pricing adjustments or fees that could drive your actual interest up or down considerably.

In other words, YOU matter as well. If you’re a risky borrower, at least in the eyes of prospective lenders, your mortgage rate may be much higher. Things like a poor credit score and a small down payment could lead to a higher rate, whereas borrowers with stellar credit and plenty of assets will get access to the lowest rates available.

Additionally, your mortgage rate can shift quite a bit depending on if you pay mortgage points or not, and how many points you wind up paying (are they worth it?) We can give you the facts to help you make an informed decision that suits your plans and goals.  Many of our brother and sister firefighters want to have their homes paid off by the time they retire.  With the help of our mortgage calculators, we can easily calculate the appropriate payment to keep that on schedule.

Lastly, rates can vary substantially based on how much a certain lender charges to originate your loan. So the final rate can be manipulated by both you and your lender, regardless of what the going rate happens to be.

Since 1971, Freddie Mac has conducted a weekly survey of mortgage rates. These are averages gathered from banks throughout the nation for conventional (non-government) conforming mortgages with an LTV ratio of 80 percent. The numbers are based on quotes offered to “prime” borrowers, meaning best-case pricing for the most part.

As you can see, 30-year fixed mortgage rates are the most expensive relative to the 15-year fixed and select adjustable-rate mortgages. This is the case because the 30-year fixed rate never changes, and it’s offered for a full three decades.  So you pay a premium for the stability and lack of risk.

Rates on the 15-year fixed are significantly cheaper, but you get half the time to pay it off, meaning larger monthly payments.  Rates on ARMs are discounted at the outset because you only get a limited fixed period before they become adjustable, at which point they generally rise.

You can use these average rates as a starting point when determining what rate you might be offered. If your particular loan scenario is higher risk, whether it’s a higher LTV and/or a lower credit score, it will probably be priced higher.

Most economists don’t see rates falling back to these lows again, though anything is possible if the economy warrants such a move.

Here’s the bottom line:  Any questions you have, just ask us.  We’re here to help you and your family members.  With all of the numbers and moving parts, the mortgage process can get very overwhelming, very quickly.  We believe you should feel comfortable and confident and we want to help you get there.  This happens through trust, education, value and understanding.  Please let us know how we can help YOU.  Thanks and stay safe!

Credit: Article originally adapted from The Truth About Mortgage Website

About the Author: Peter

Firefighter Mortgages® is prepared for the COVID-19 outbreak. Read More